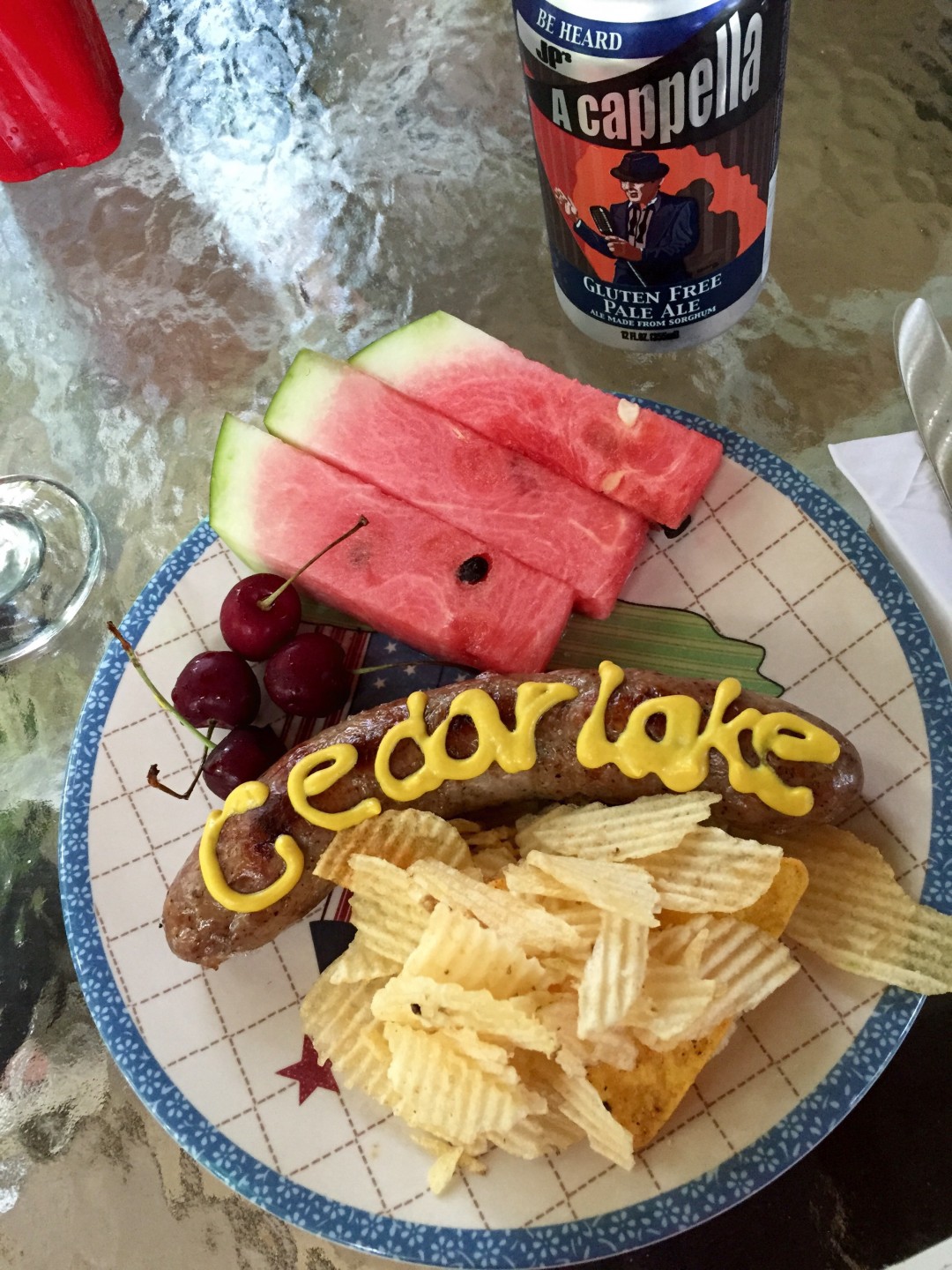 There’s really nothing more refreshing than a weekend at the lake. Hopping on the boat with your best friends, jumping in the lake, playing cards, making s’mores; nothing makes you feel more like a kid again than acting like a kid. Throw in some of your best friends and you’ve got a bona-vied winner of a weekend.

So when my best friend called me up and asked if I’d like to have such a weekend with some of our best friends from college, I immediately said “yes!” and ran into my closet to rummage through all of my swim suits.

All week the weather played roulette with our sanity, jumping from 20% all the way to a 60% chance of rain for the weekend. Finally, on Friday morning, my friend Carolyn called it like it was and said that even if it did rain, we’d make the best of it. Agreeing to enjoy the weekend, rain or shine, we packed our bags, hopped in the car and made our way to Cedar Lake, WI! Taylor and Quinn are smiling on the inside, I promise. 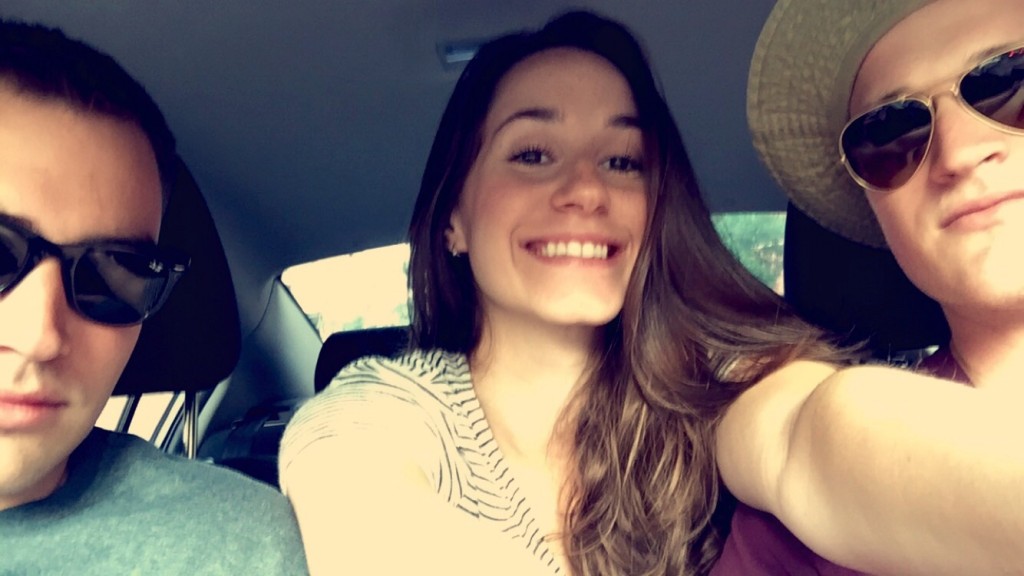 About two hours later we pulled into Slinger, the town Cedar Lake is in. Carolyn and Megan’s family founded the town, and built the house we were staying in, a beautiful victorian looking house atop a hill overlooking the lake. We dropped our duffles onto our bags and settled down with some beers for the night. We all agreed to head to bed on the early side so that we could wake up early and embrace whatever sunshine the gods would send us, so we said our goodnights, and let breeze from the open windows sing us to sleep.

The next morning was sunny without a cloud in sight! Desperate to make it out on the lake while the weather was good, we threw on our suits, grabbed some towels and a cooler with drinks, and headed for the boat. 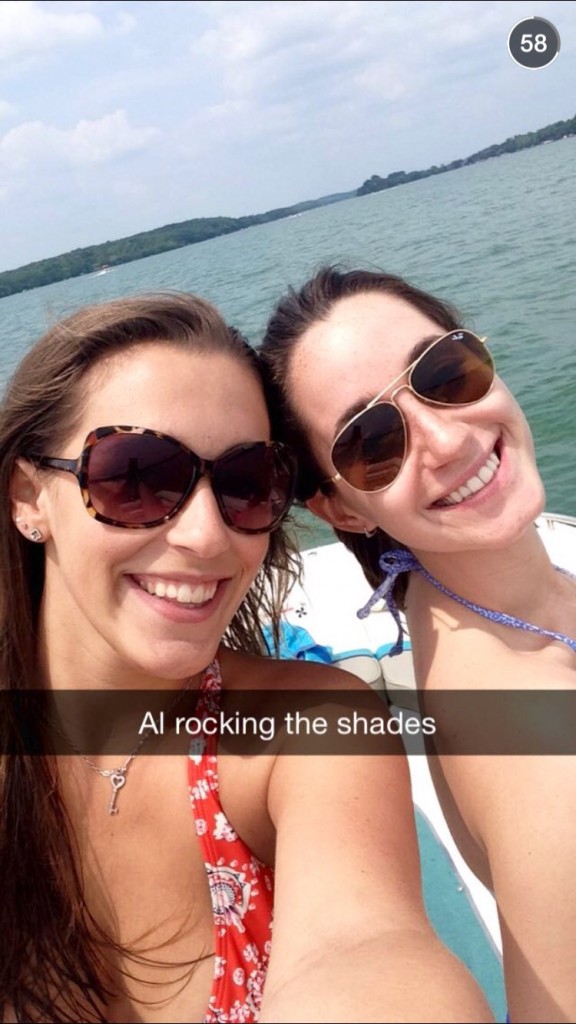 I won’t lie, I loved these sunglasses. They’re Quinn’s but I wore them the entire afternoon.. finally a frame small enough for my face! I plan on saving up for a pair. 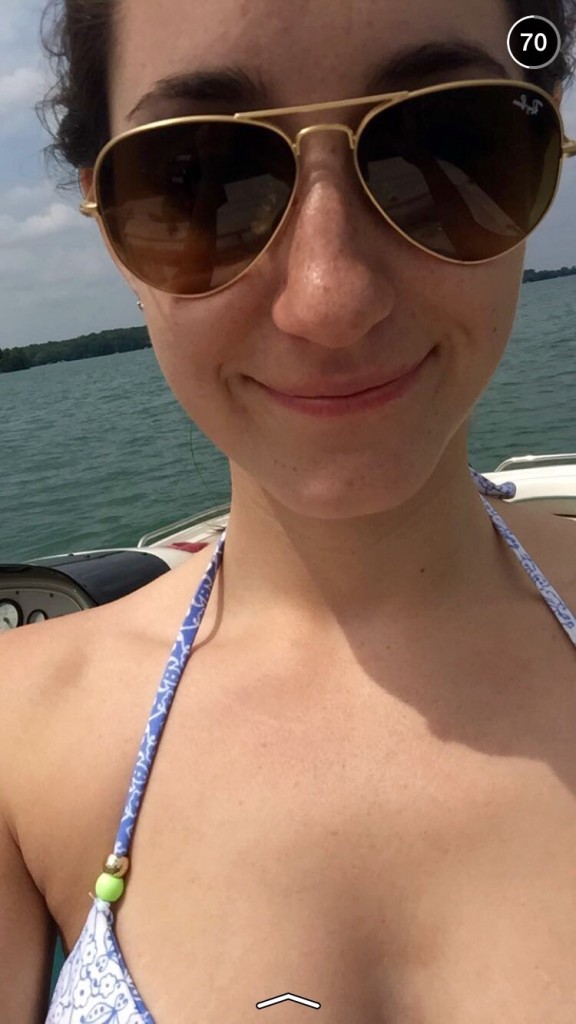 Quinn refused to put on sunscreen, which I know he regretted the next day. There was a snap of Taylor in the water with the caption “He can’t swim” which makes more sense for the photo below, but I’ve lost it. The weekend seemed to be mainly documented by snap chat, and I’m not sure why, but I do apologize for the quality of photos. 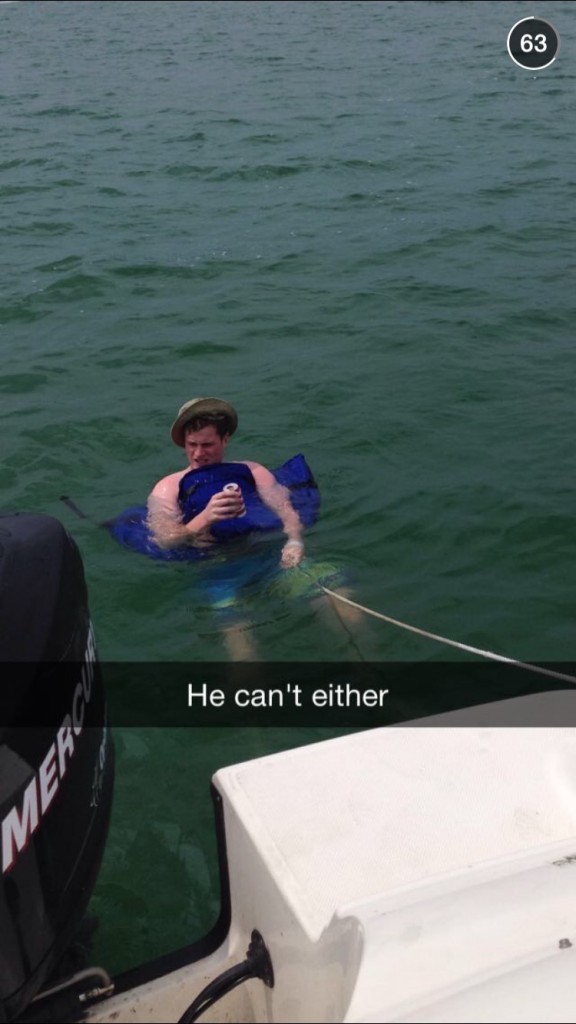 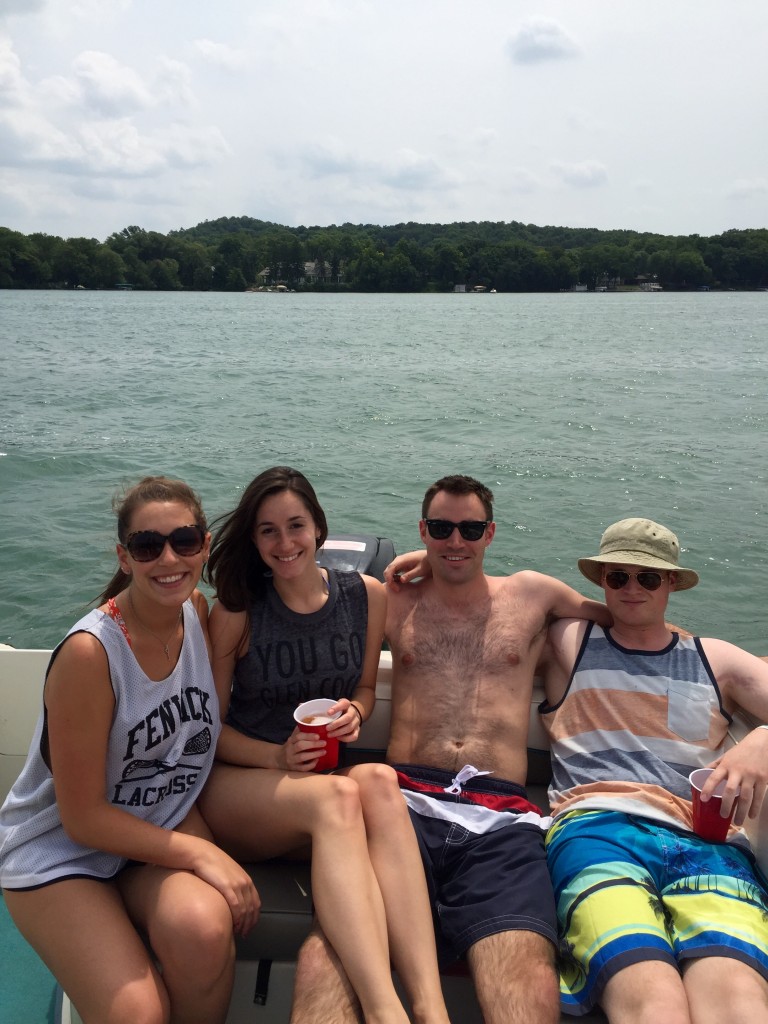 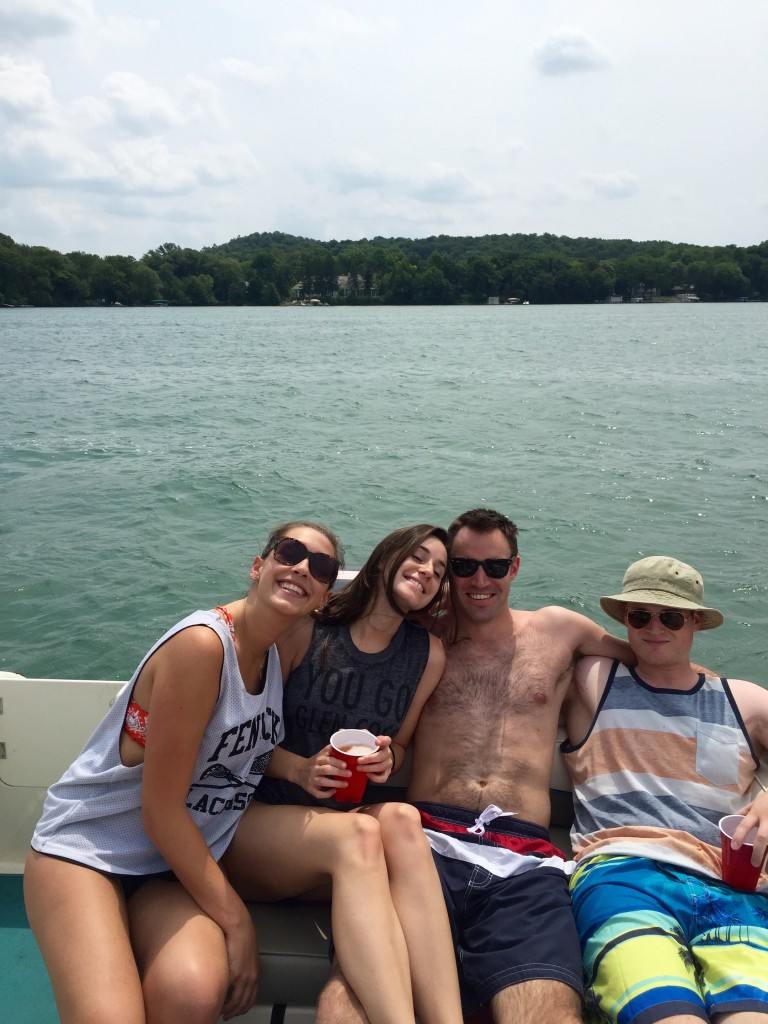 Yes my shirt does say “YOU GO GLEN COCO” 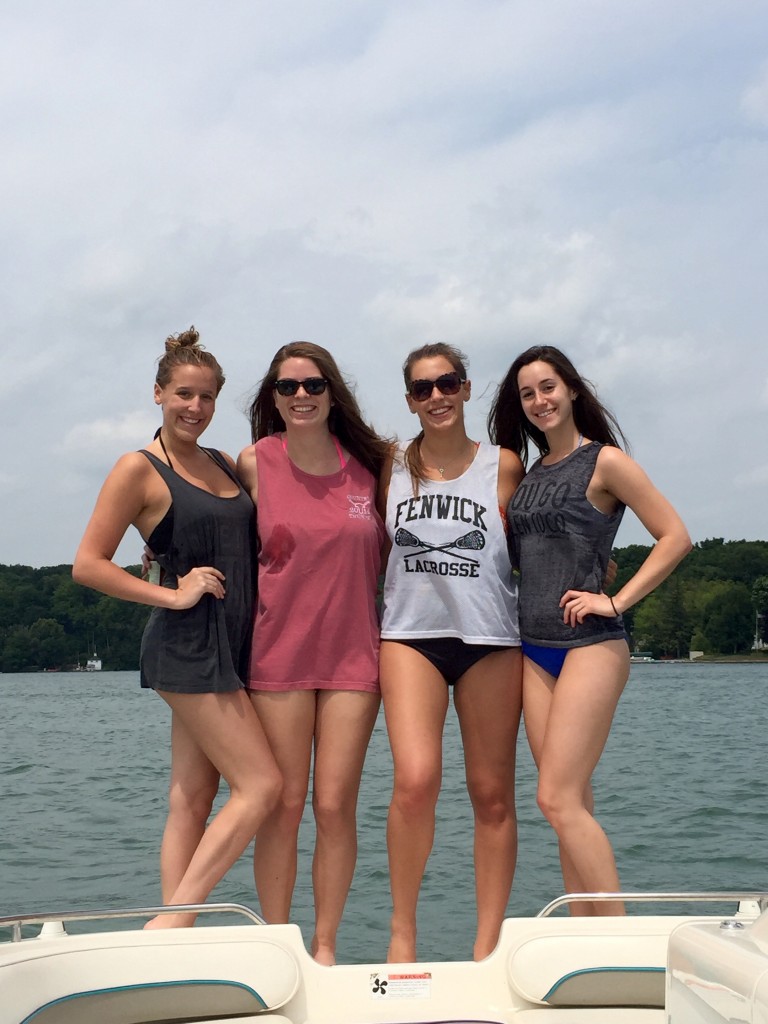 The pretty girlies Megan, Hannah, Carolyn, et moi. Hannah ran 10 miles before coming on the boat with us, she’s training for a half marathon. Virtual high fives for Hannah, 10 miles before 10am is impressive! 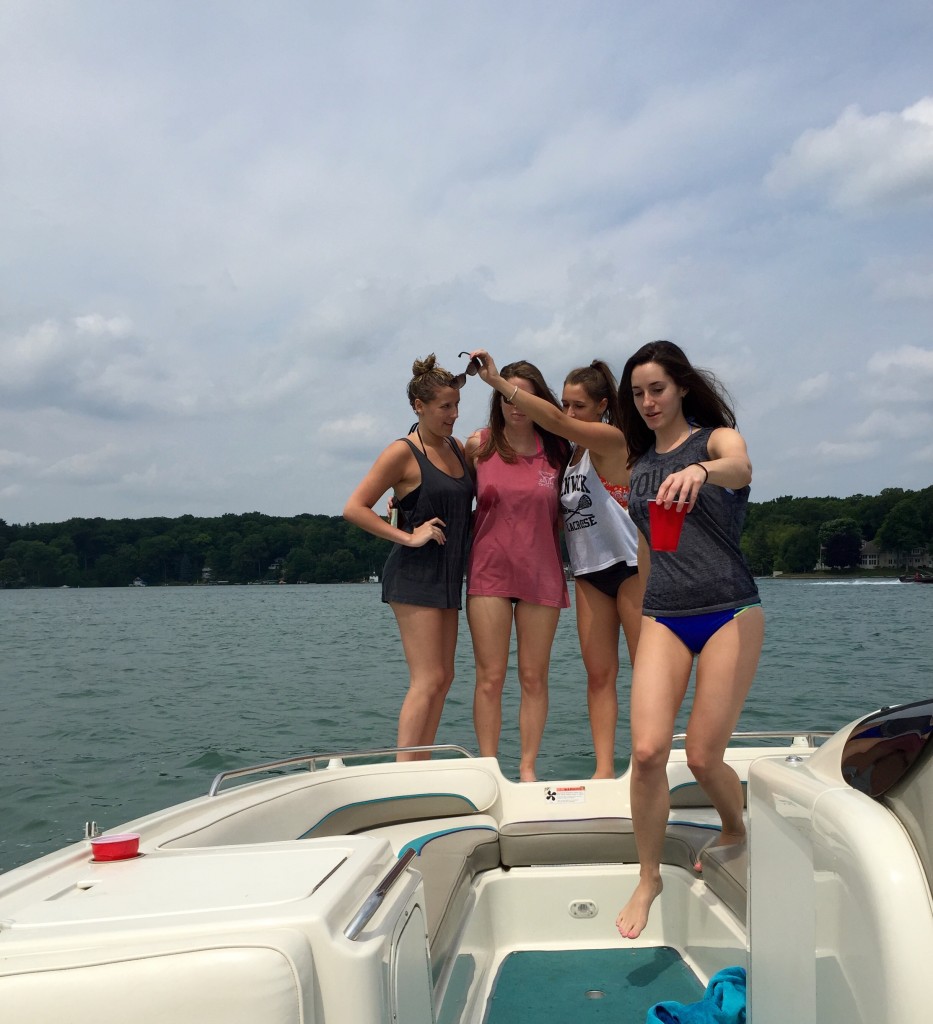 After a good jump in the lake we’d all worked up an appetite, so we docked and headed back up to the house for lunch. 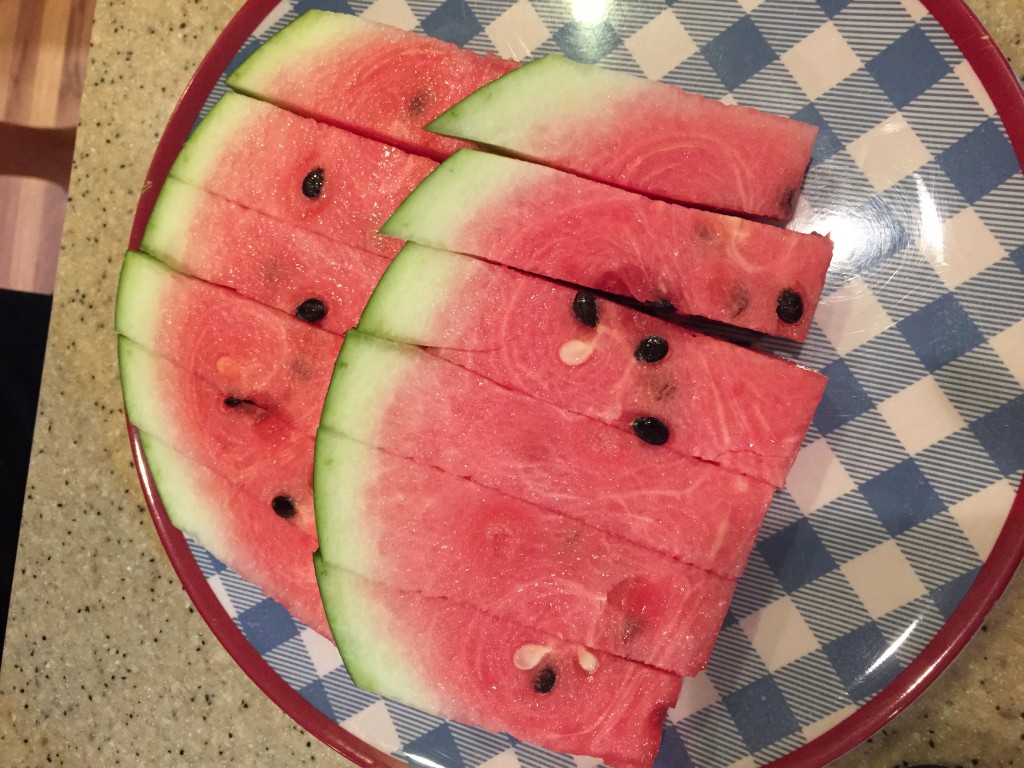 FINALLY, a Pinterest idea that went well for me! With a sharp knife and lots of hands, we cut our watermelon into strips, making it just that much easier to eat. I will never eat watermelon another way. 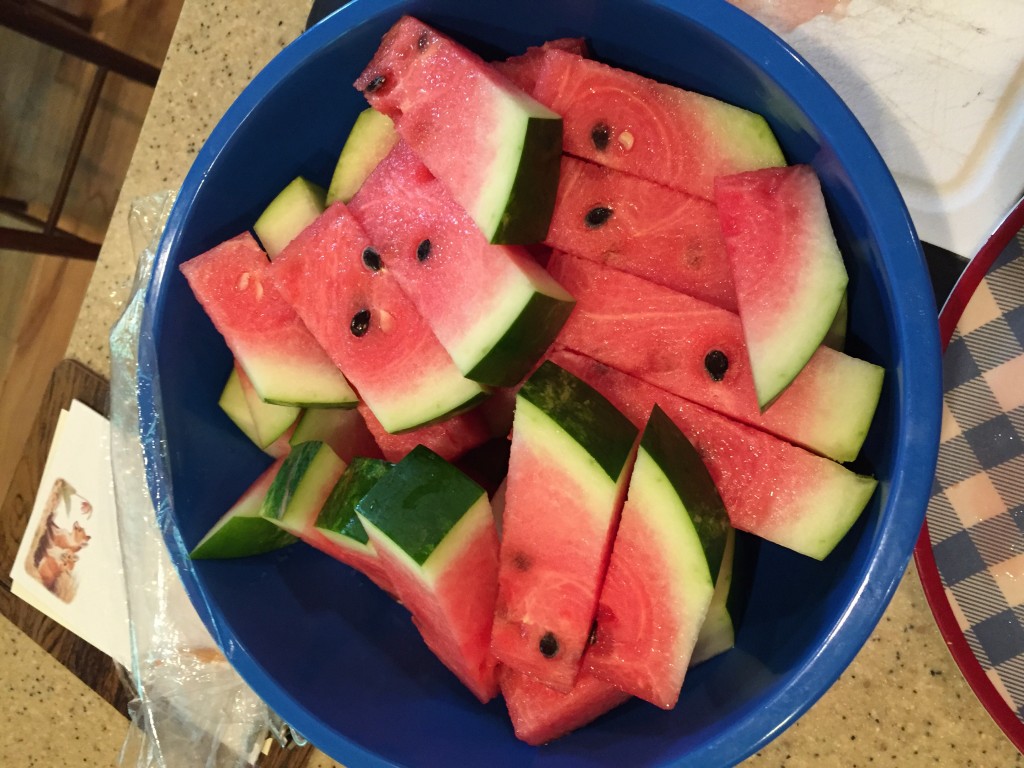 Lunch was a beautifully simple buffet of sandwich fixings, chips, salad, and watermelon. After lunch we all headed back onto the boat for a nap, and once we felt we’d sunned ourselves enough for the day, the girls came in for some pre-dinner cards while the boys played basketball. 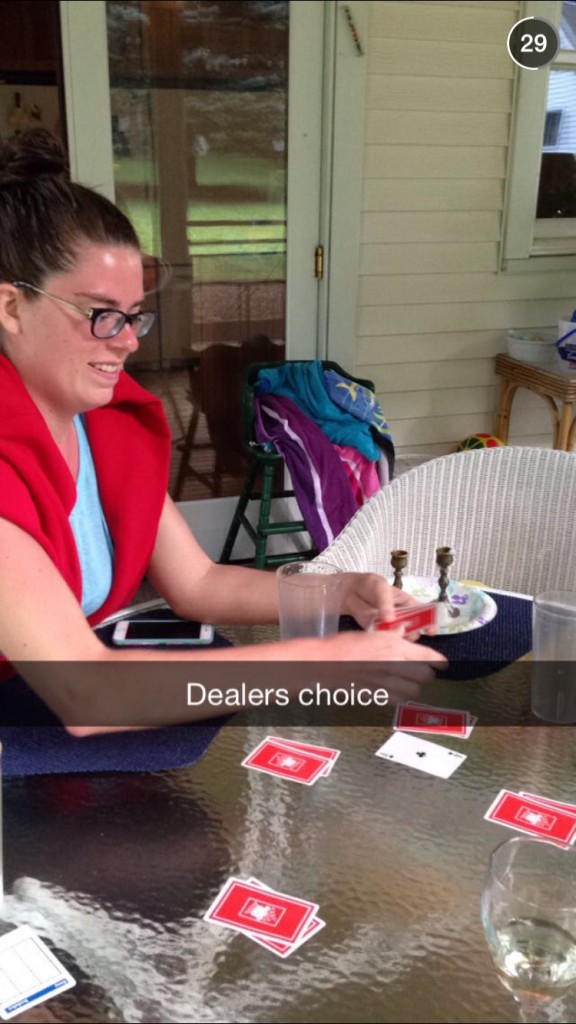 I clearly take my cards seriously. 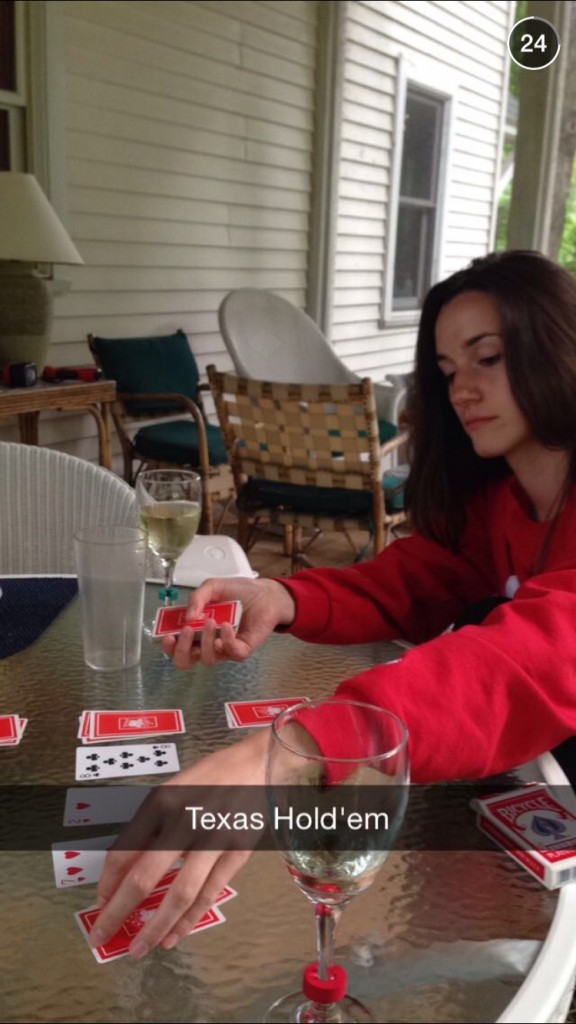 For dinner we boiled and grilled beer brats. Carolyn was an extra awesome host and separately boiled mine in my gluten-free beer I’d brought for the weekend. (Acapella is the beer if you’re interested in finding some to try. It comes in a can too, so it travels well!) She even made sure to grill mine on a separate part of the grill. That’s friendship. 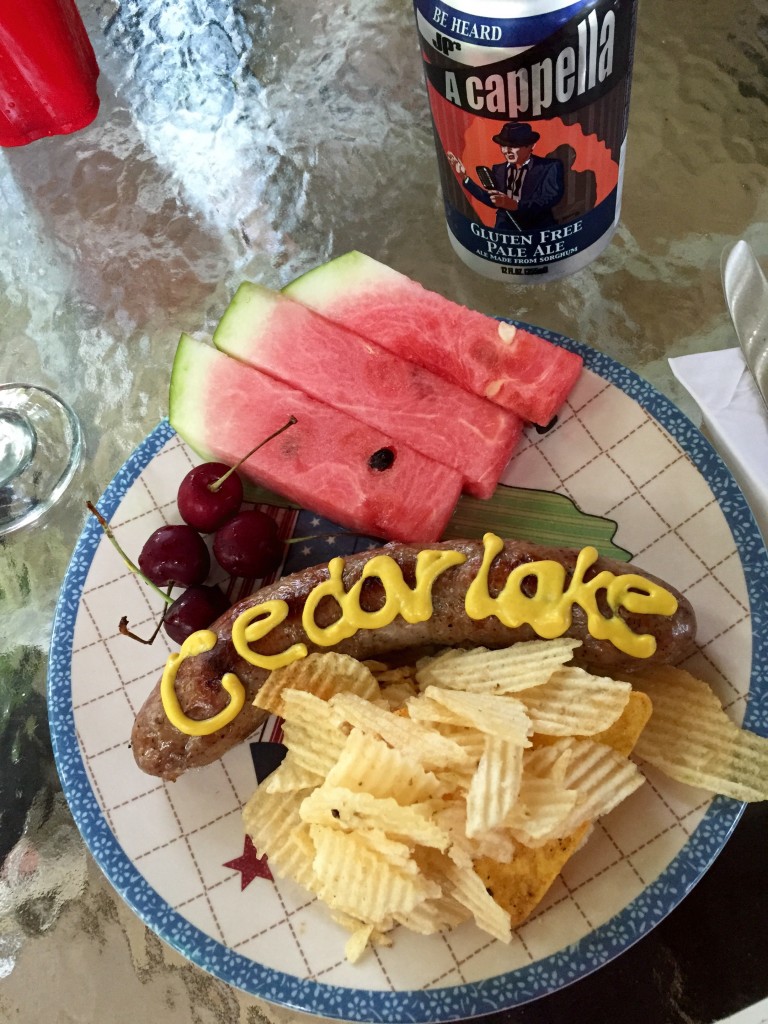 For all my non gluten-free subscribers, the picture below is for you! New Glarus is a WI favorite, and very well known for their Spotted Cow, as well as Two Women. If you’re ever able to pick some up, it comes highly recommended from everyone I’ve ever asked about it. 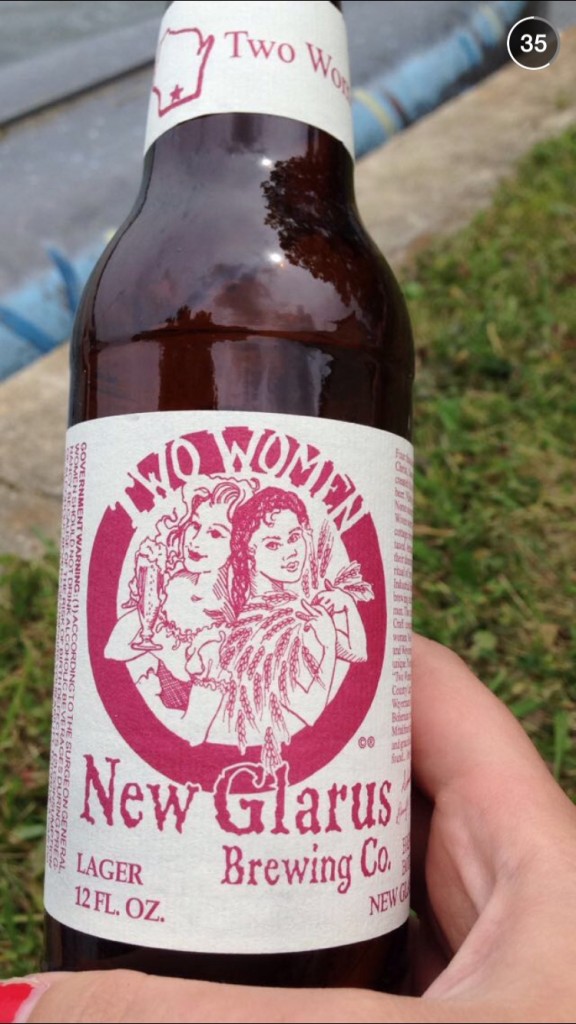 After dinner, the vodka made an appearance, and so did dancing Quinn! 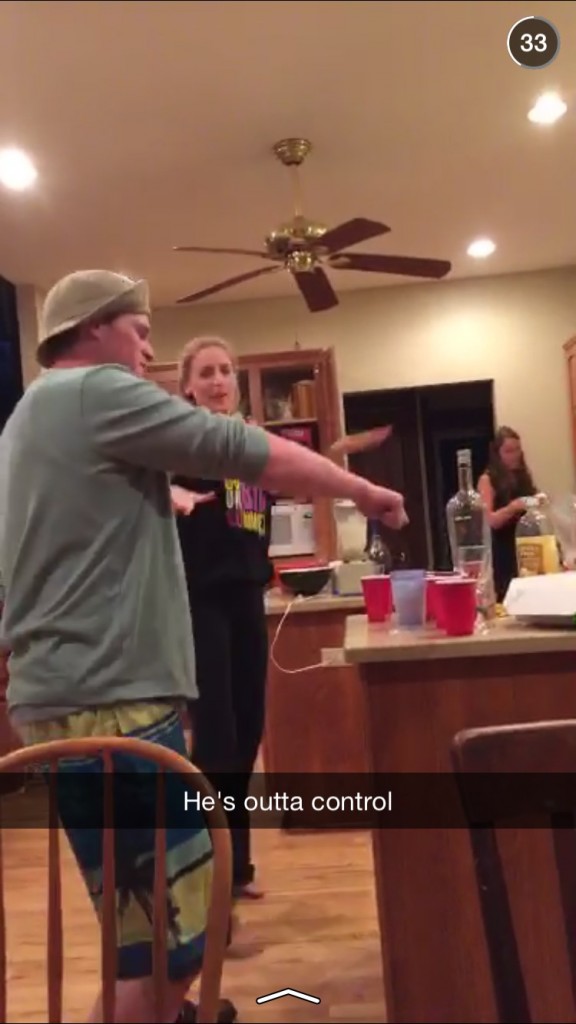 He’s gonna love that one… we did venture out and walk to the local bar (directly) next to the house for a drink. After all that nonsense, we got down to serious business. 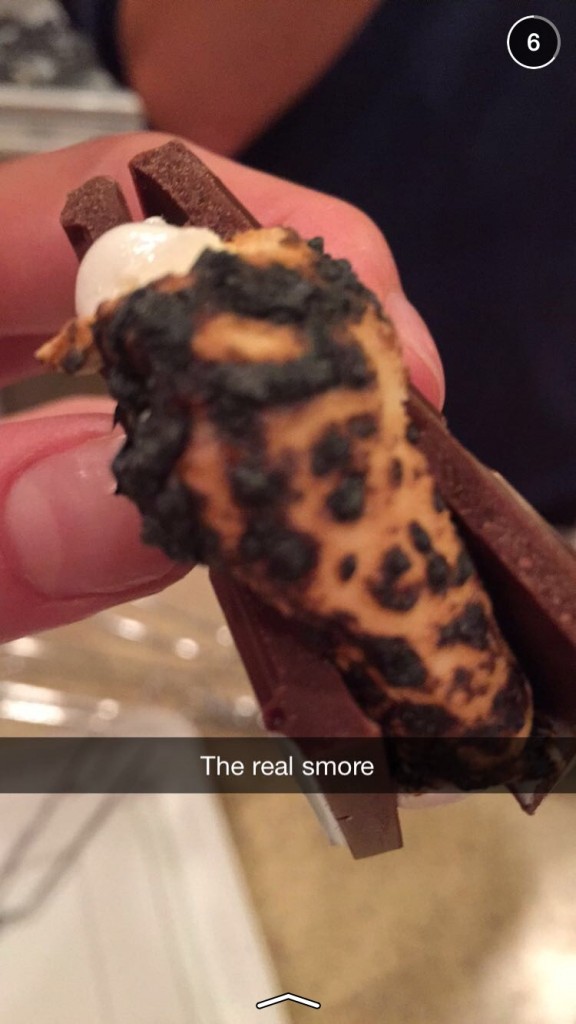 Yes, when there’s no gluten-free graham cracker in sight, I power through.

After a few more drinks and a few more songs, we called it a night and prayed for all the rain to come and go before sunrise.

The next morning did not disappoint… 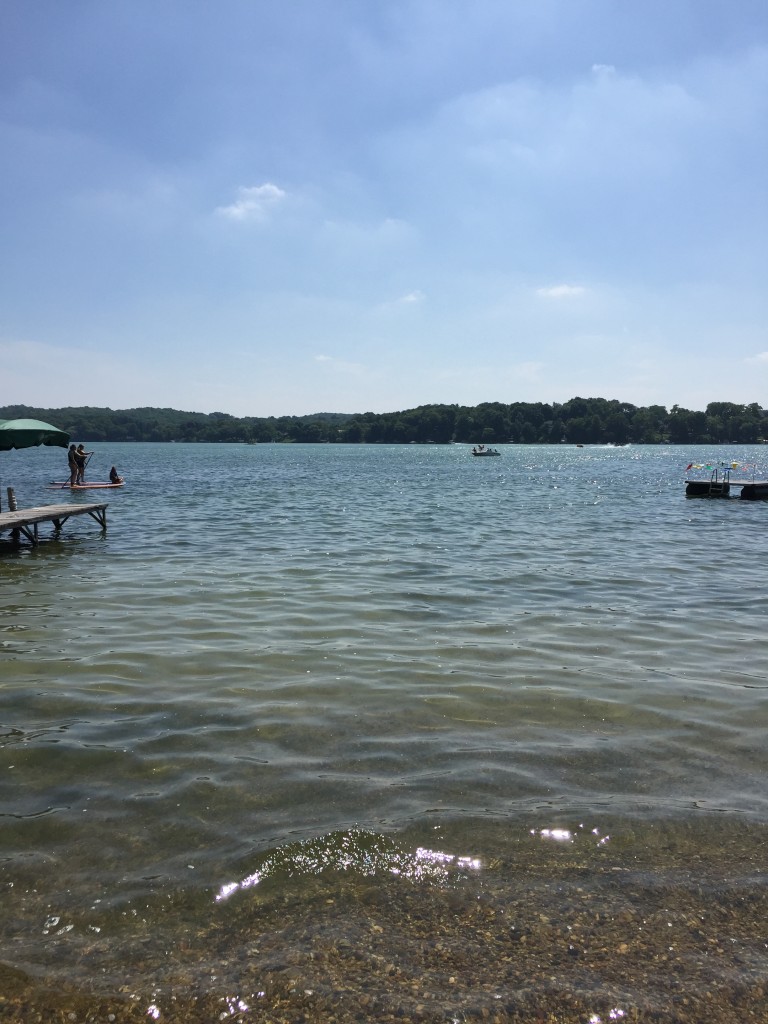 After a light breakfast of peaches and coffee, we headed to the boat for some water sports. 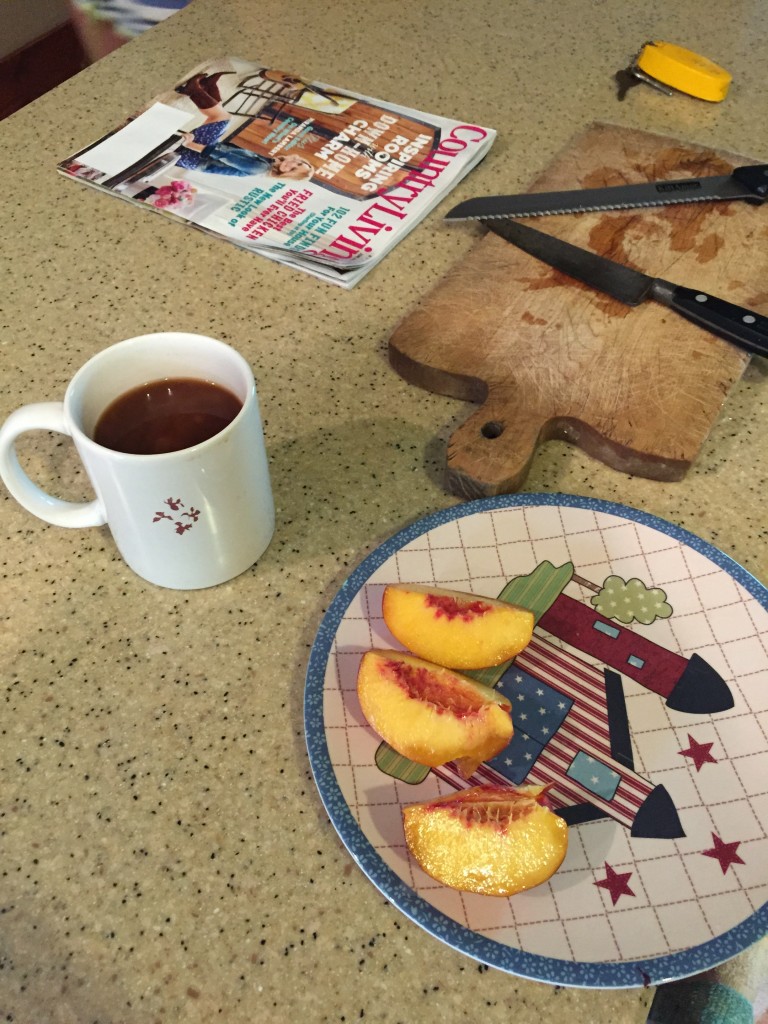 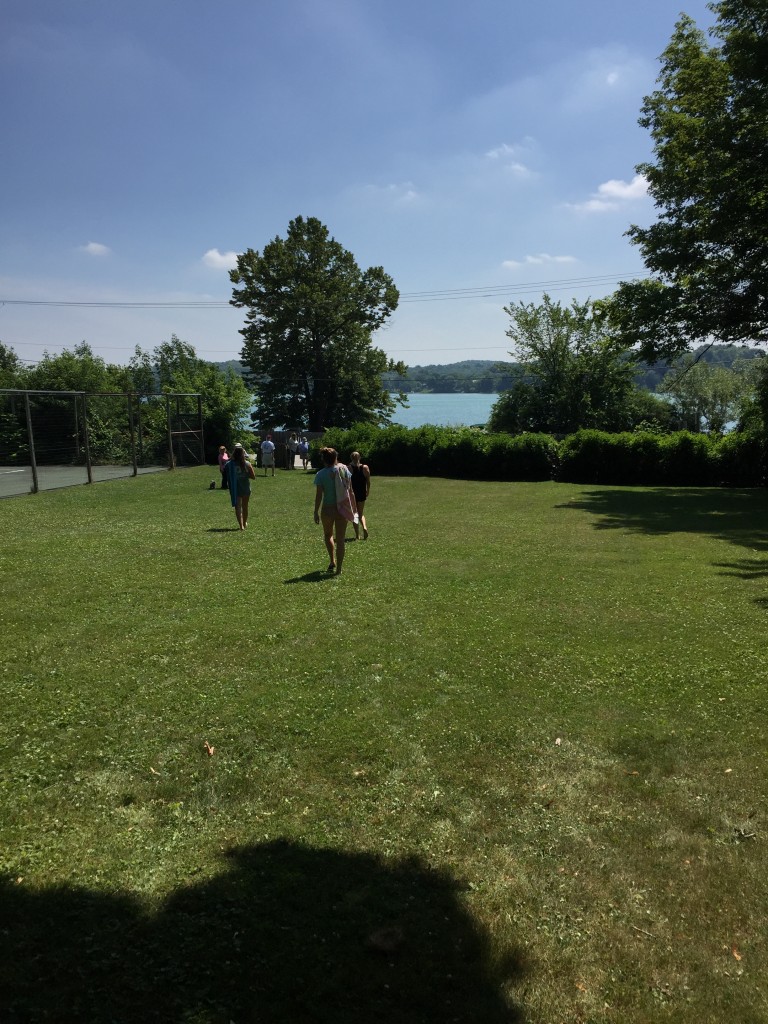 Hannah and Megan began the tubing, holding on for an impressively long time. 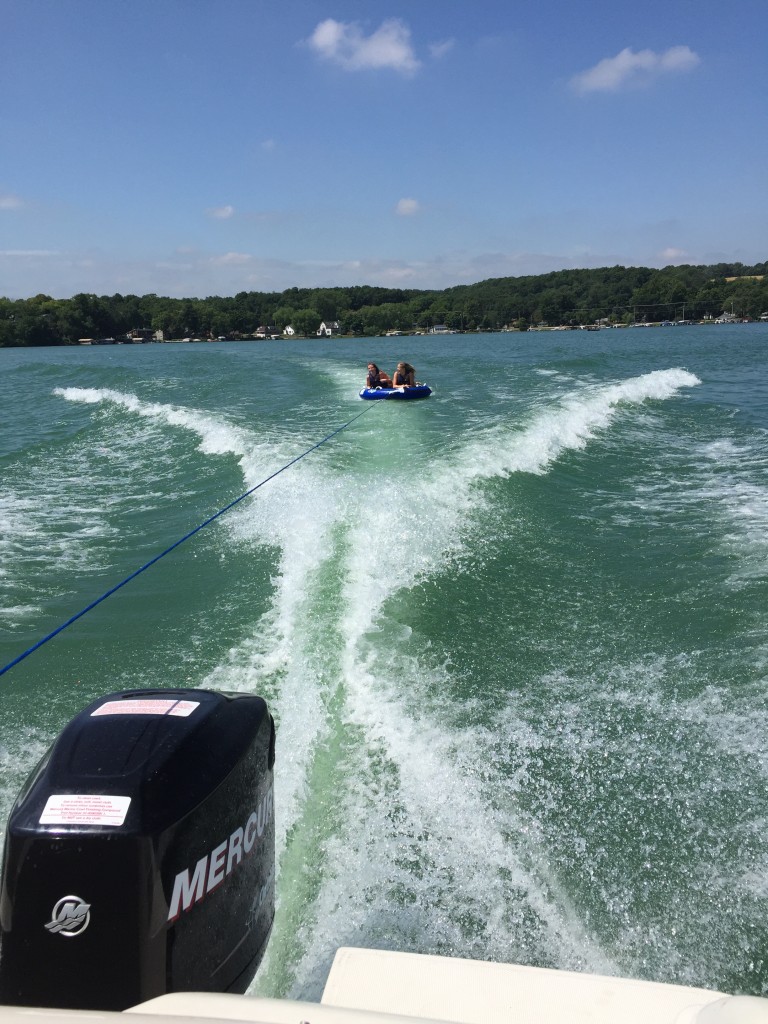 I look my job as spotter somewhat seriously. Quinn spent the majority of the morning hiding under a towel because he was… ahem, purple from all of yesterday’s sun… 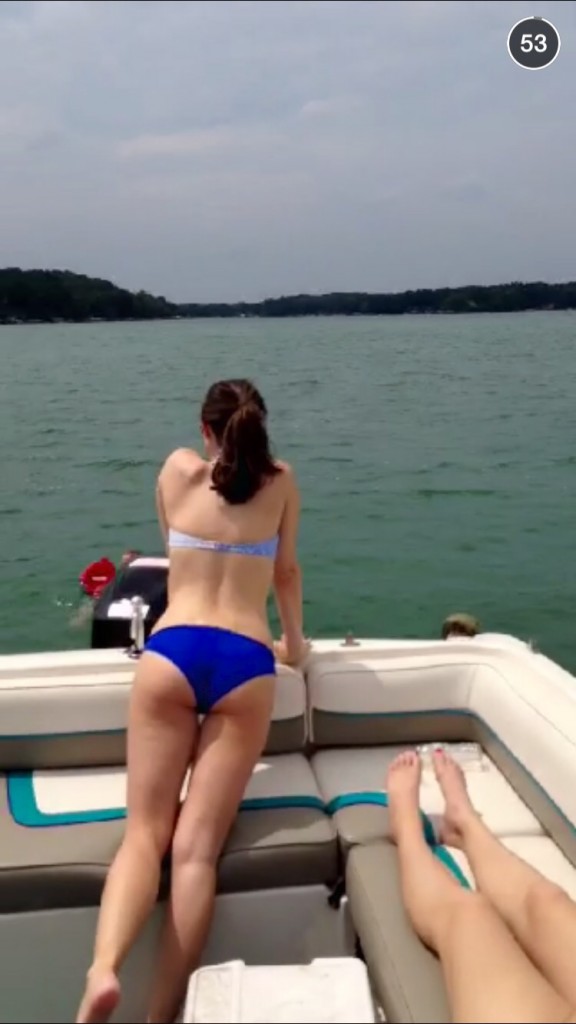 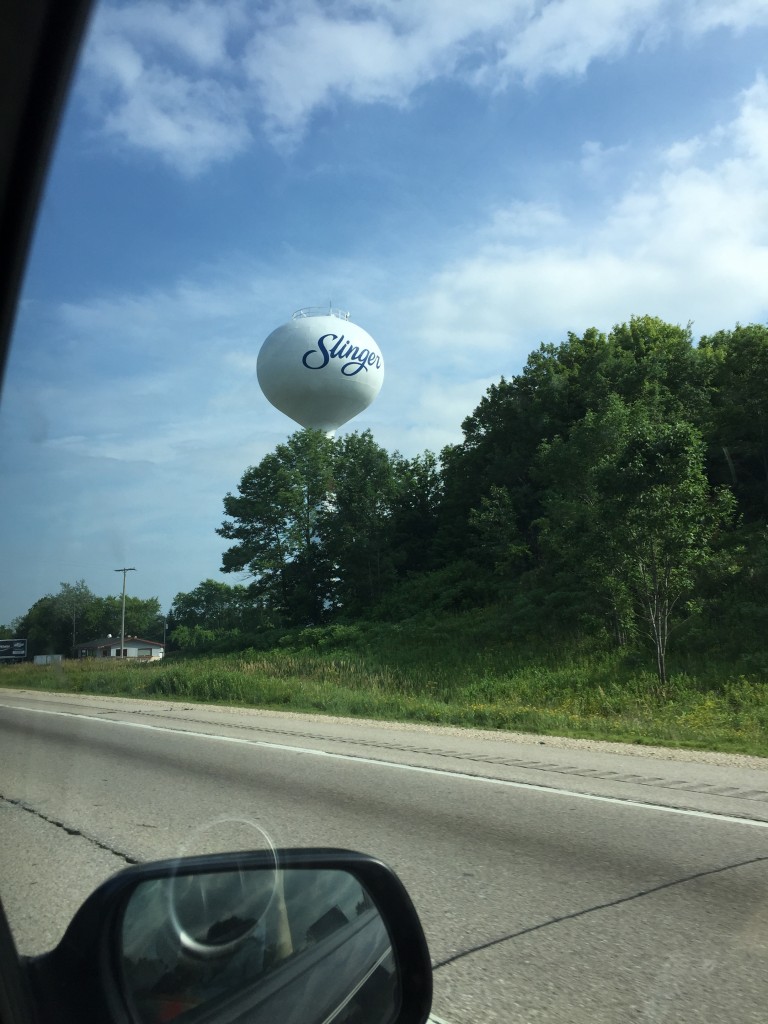 Thank you Care and Meg for treating us to a wonderful weekend outside of the hustle and bustle of the city. I can truly say I returned back to my apartment feeling like a new woman. 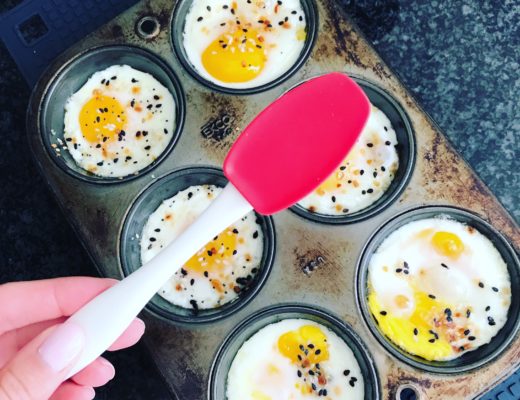 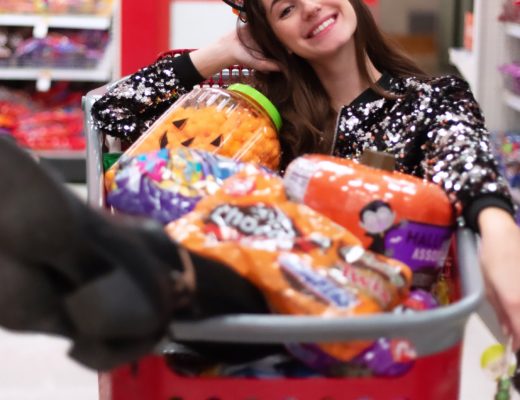 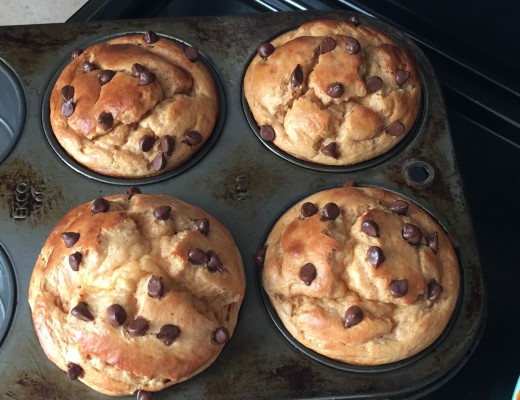