Sometimes you just have to escape the city. The pavement gets too hot, the hustle and bustle becomes suffocating, and no matter where you go, you are never truly alone. So when my dear friend Paige invited my girlfriends and me up to her lake house for the weekend, I was packed before she could even send over the address.

The minute everyone was off work on Friday, we all piled into the car and headed for Lake Geneva, WI. It’s about a two-hour drive from the city, and with everyone high spirits, we indulged in some very serious car karaoke. 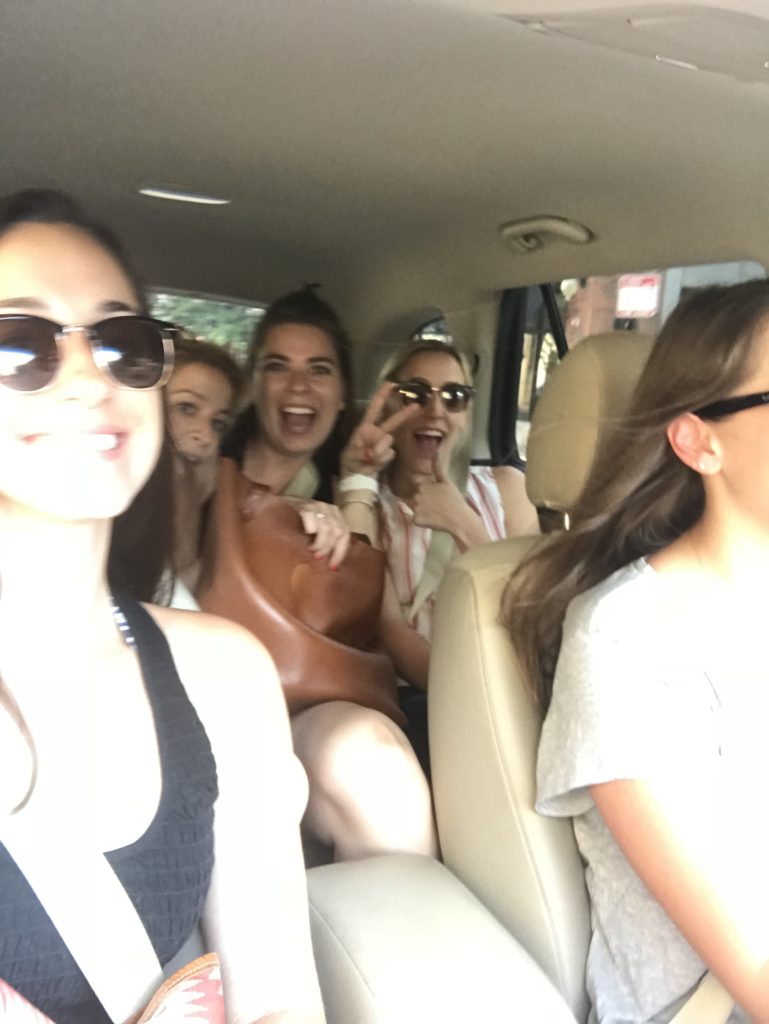 We arrived just in time for dinner: build your own tacos, with steak right off the grill, fresh guacamole and plenty of wine. Paige’s mom knew I have a severe gluten intolerance and used a completely separate grill for my steak! Talk about commitment! 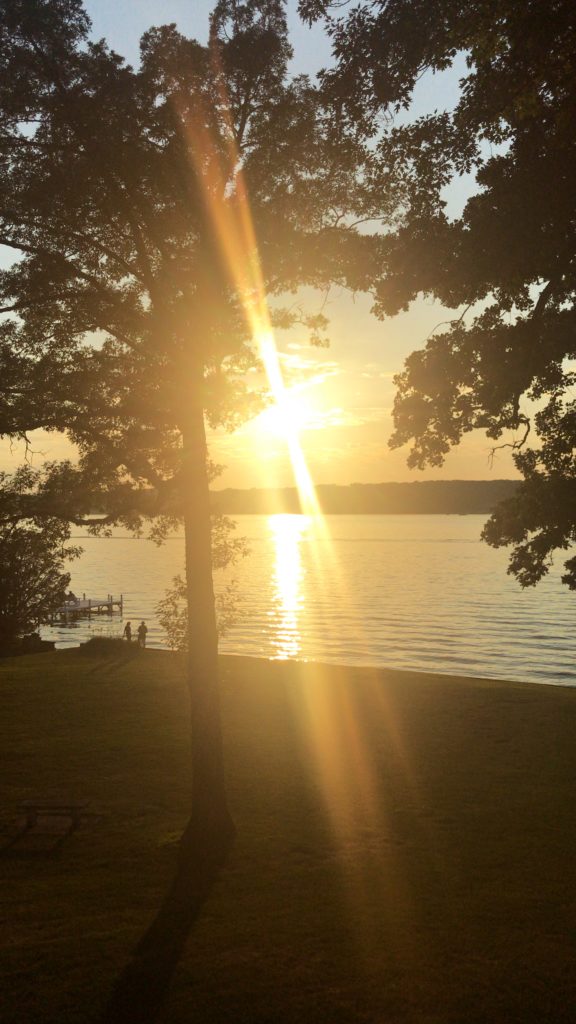 During the meal I let it slip that I’d never seen Jurrasic Park, so after dinner, we all got into our jammies and snuggled up on the couch to watch the original. I’d like to say I made it through, but we were all asleep within fifteen minutes. Stylish minds clearly think alike, because Carolyn and I brought the same travel PJs from Target. IF you are in the market for travel jammies, I cannot recommend these enough. I have them in multiple colors, but the black are by far the softest. 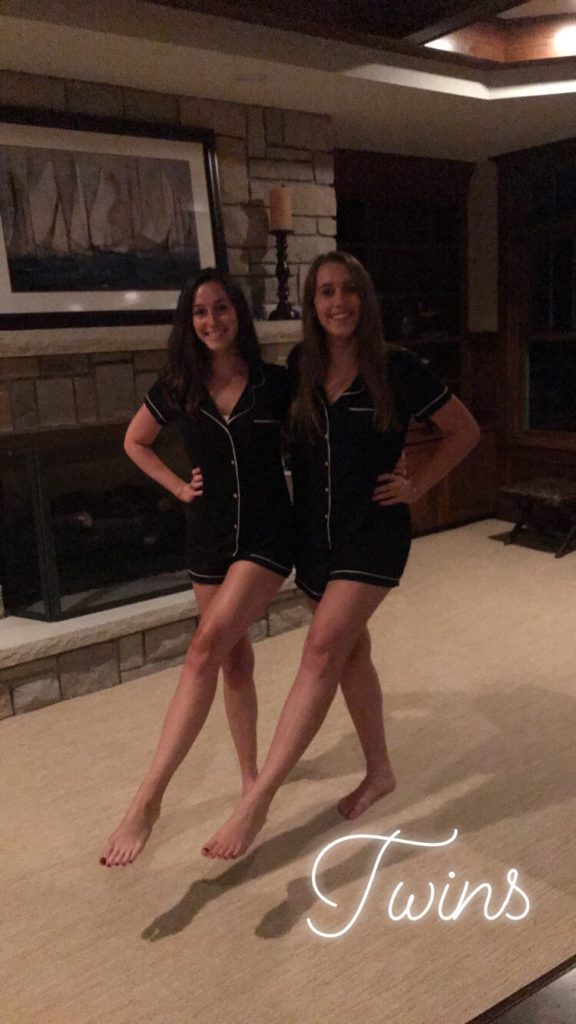 The next morning we awoke refreshed, and ready to take on the day! Unfortunately, the weather decided to sleep in a little, so after a full breakfast put on by Paige’s parents, we threw on some sweatshirts and headed into town to do a little shopping. 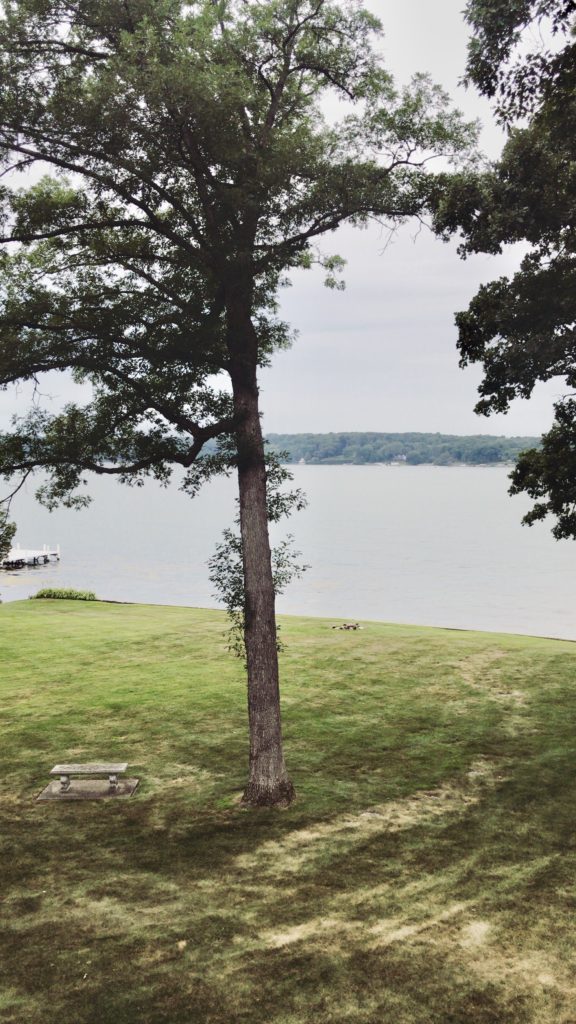 On our way out we saw the first of two forms of wildlife. Right in the yard was a turkey, doin’ its thang. Apparently, it’s very common to see turkeys roaming around. This was definitely news to me, and I found it hilarious. 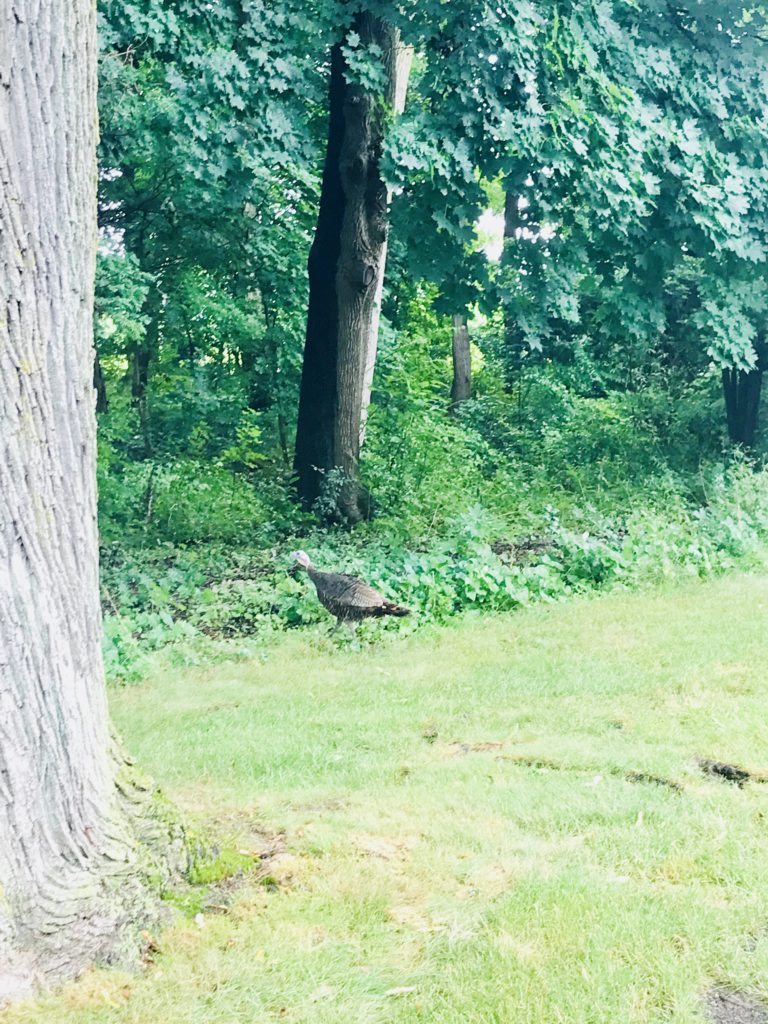 Then about halfway into town, Paige stopped the car exclaiming that she’d seen a kitten on the side of the road! While I couldn’t get a snap of him, there was, in fact, a teenage kitten chillin’ in the cord fields. After two rescue attempts, we decided he rather enjoyed the cornfields, so we let him be. 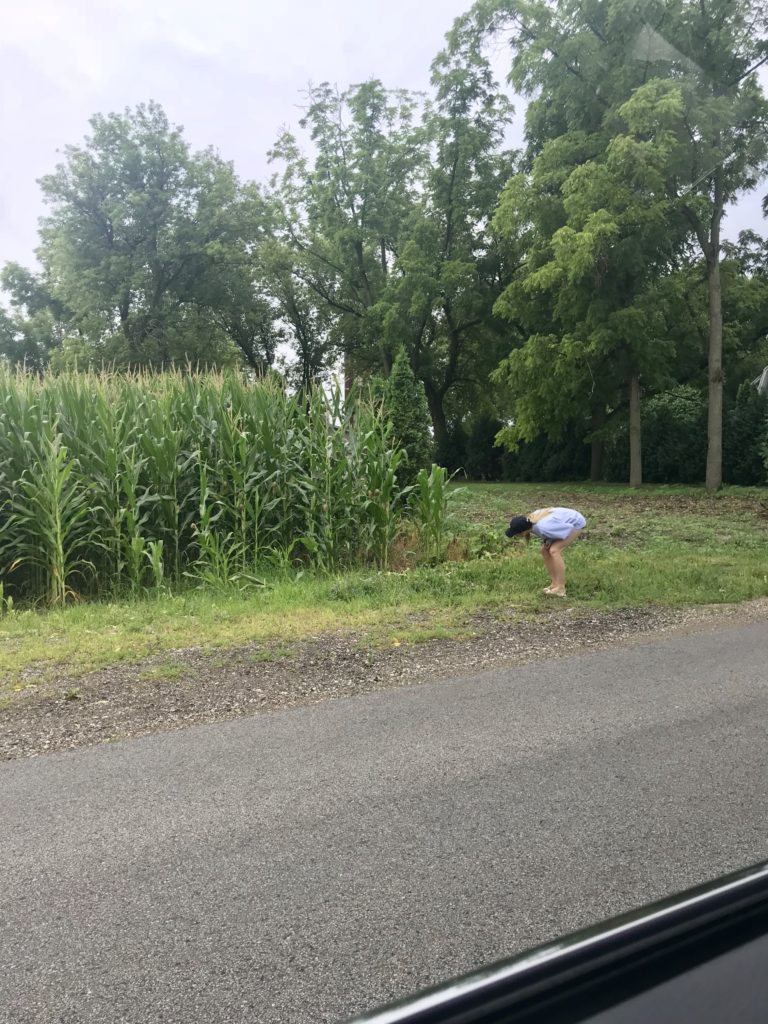 Something to note about Lake Geneva, it’s basically like Chicago in Wisconsin. Every shop we passed had other locations in the burbs or downtown. It was kind of a home away from home feeling. 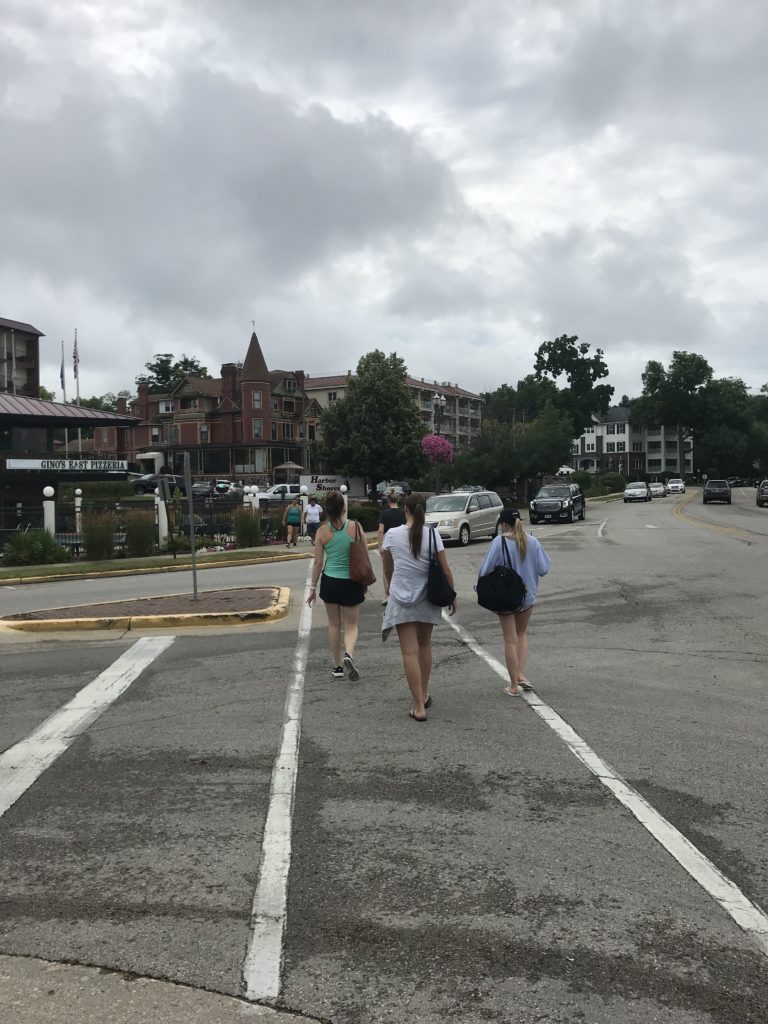 With a squeal of delight, Hannah spotted Kilwins, an ice cream shop we just HAD to go in. And let me tell you, I’m so glad we did. 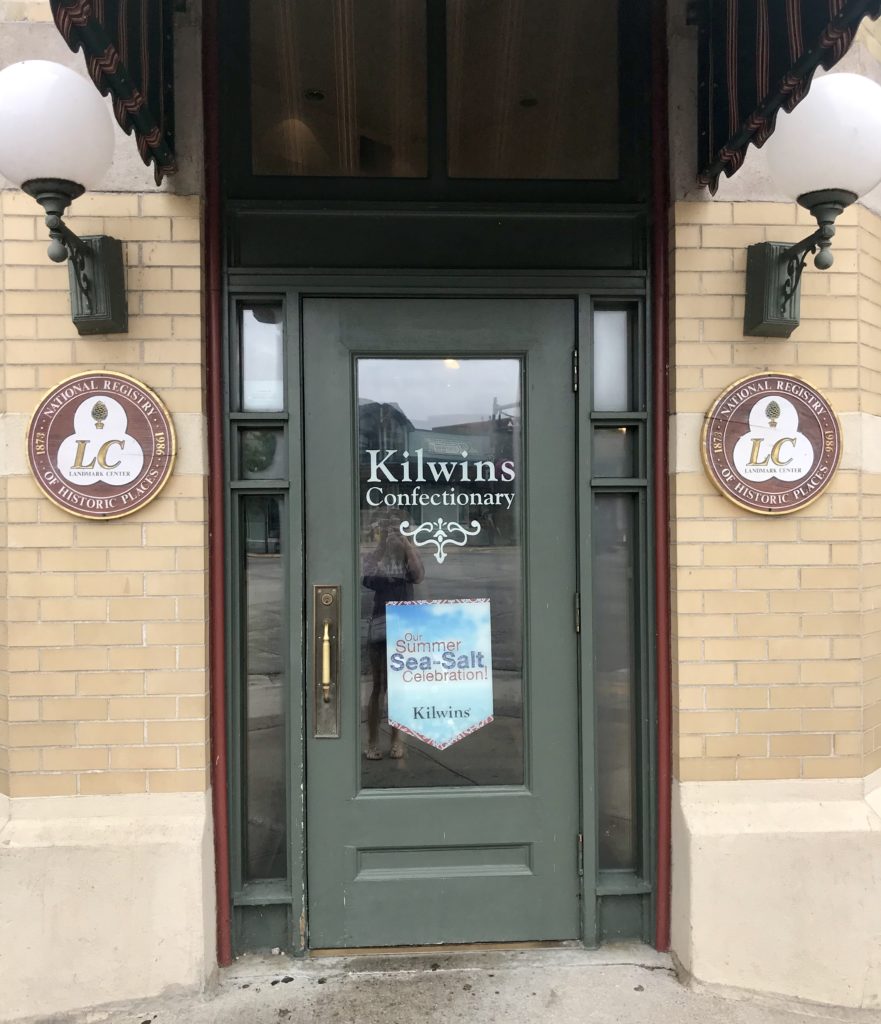 Upon entering we were immediately offered samples of fudge. The charming old lady behind the counter smiled every time we accepted a sample, and upon finishing would ask with delight, “Would you like another dear?” 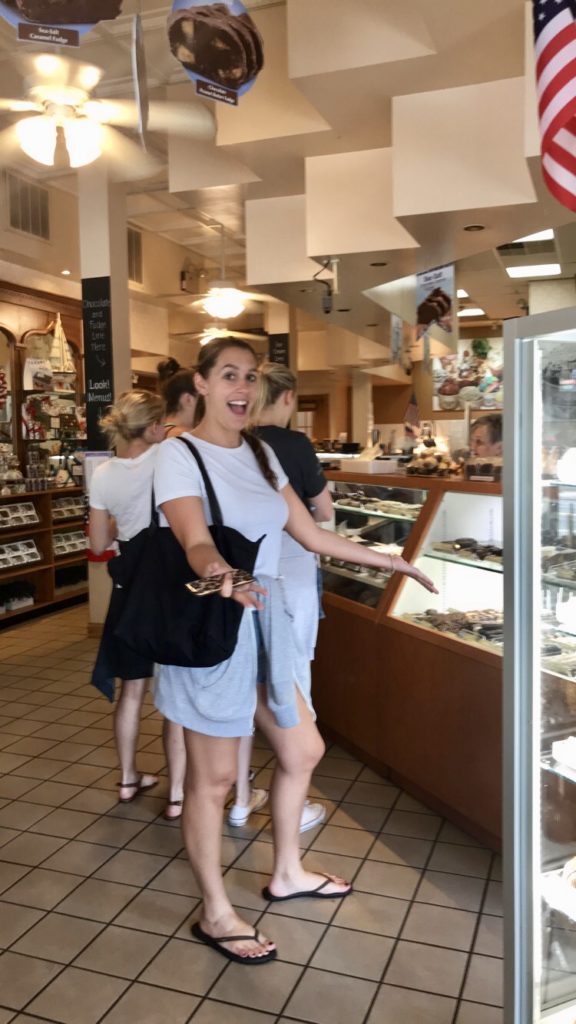 About 15 samples of fudge and ice cream later, we all left with different combinations of ice cream for “second breakfast”. I went with pistachio and coffee chip, and I regret nothing. 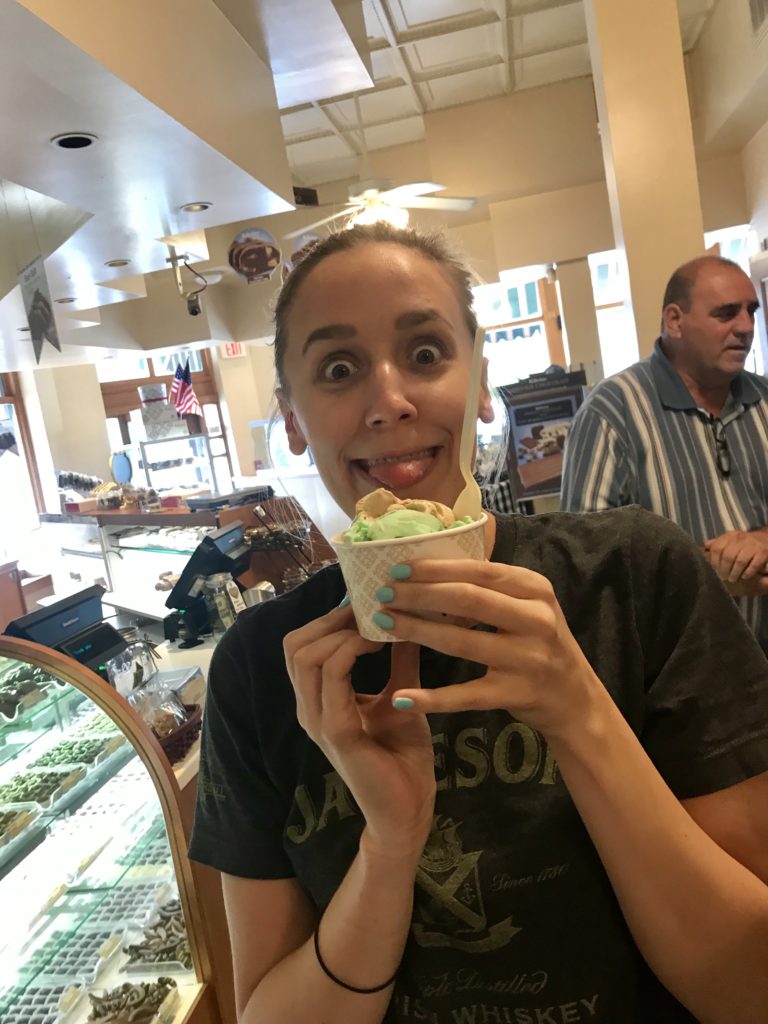 Apparently, Kilwins has a downtown Chicago location. So if you wanted to get the killer combo I had, you can! 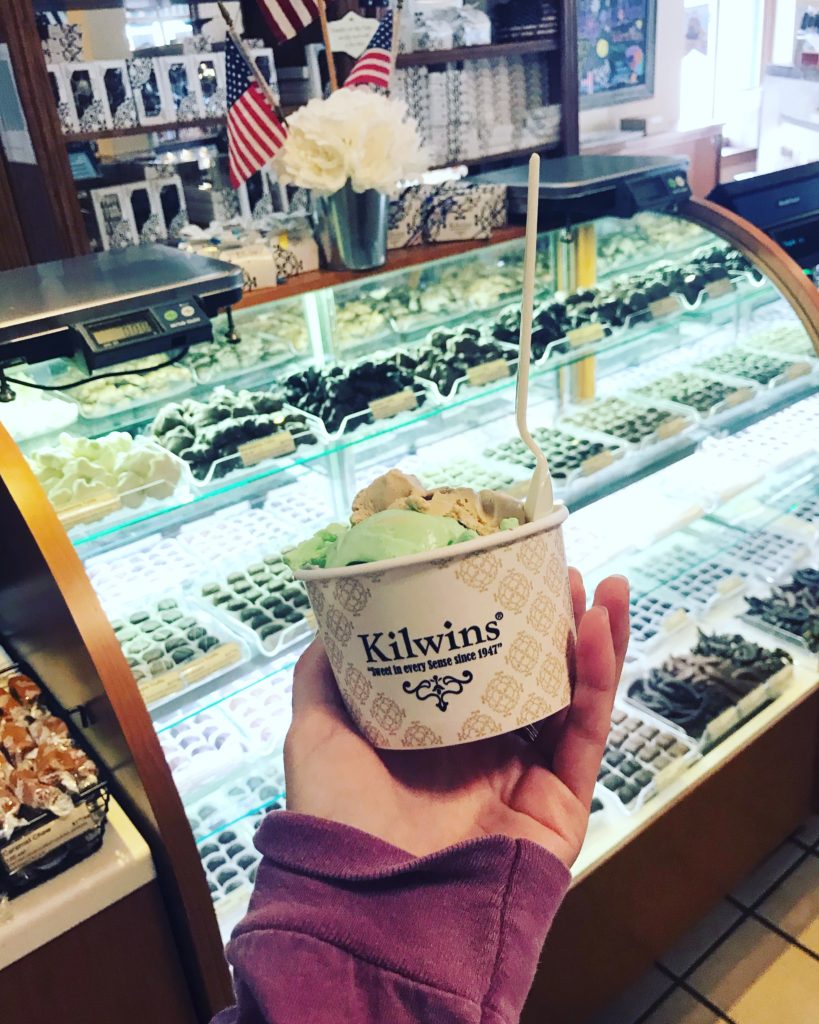 Since we knew we’d need more wine for the evening’s festivities, we walked down the road to a little place called The Bottle Shop to stock up. We had no idea we could have so much fun in a wine store, but each of us left with a bottle of wine, and a little present. I picked up some cocktail napkins that read “Rescuing Wine, One Bottle At A Time”. Cuz I’m a martyr like that. 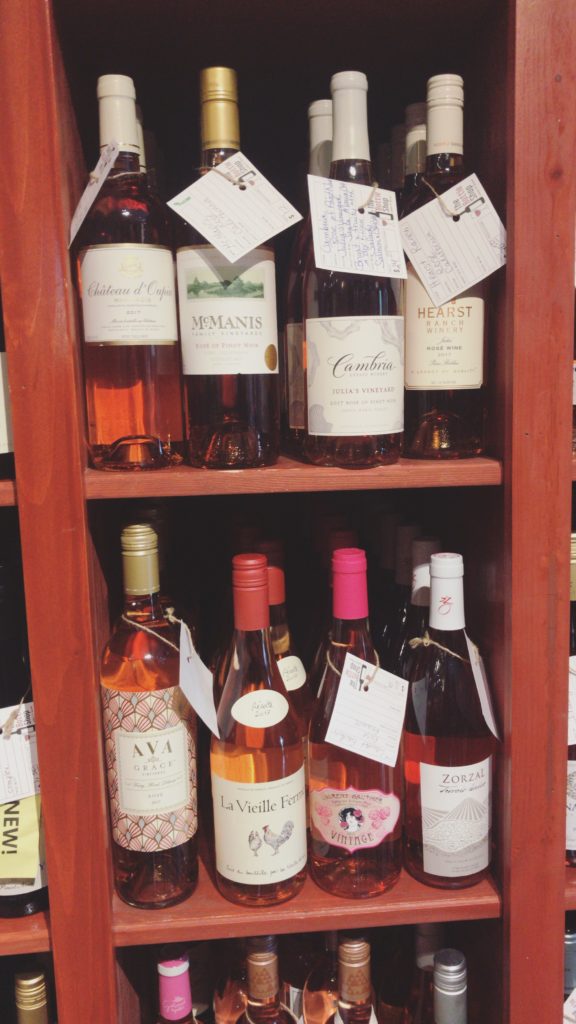 Before we headed back home, we walked through a couple of the cute shops and tried some things on. Claire got a top, so did Carolyn and I got a necklace that is adjustable! It probably doesn’t shock you that this feature excites me very much. The necklace makes an appearance later in this post, so be on the lookout! 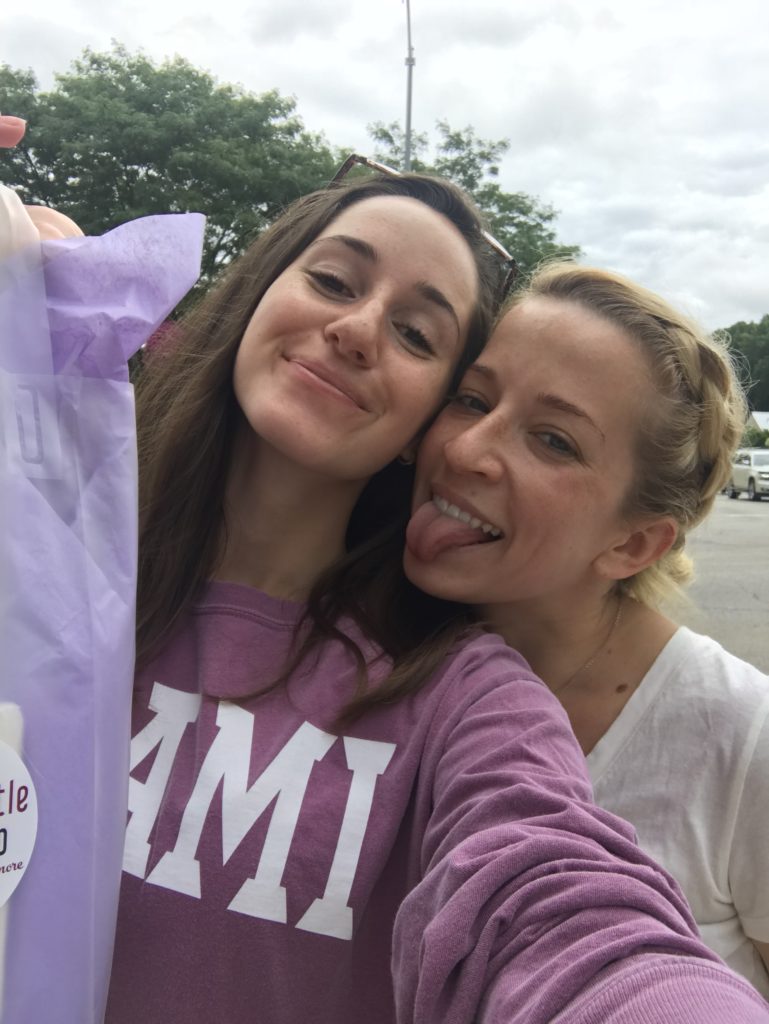 When we arrived back home it was about time for lunch, so what does one do when it’s lunchtime at the lake? Make paninis of course! After lunch, Hannah and Claire went on a run, and then we all decided it was nice enough to go out on the boat. The fact that I have no pictures of this boating/jet skiing afternoon makes me a bad blogger, but alas I did not want to jeopardize getting my phone wet. You’ll just have to trust that after a boat ride, jump in the lake, and ride on a jet ski, a smile was permanently plastered to my face. 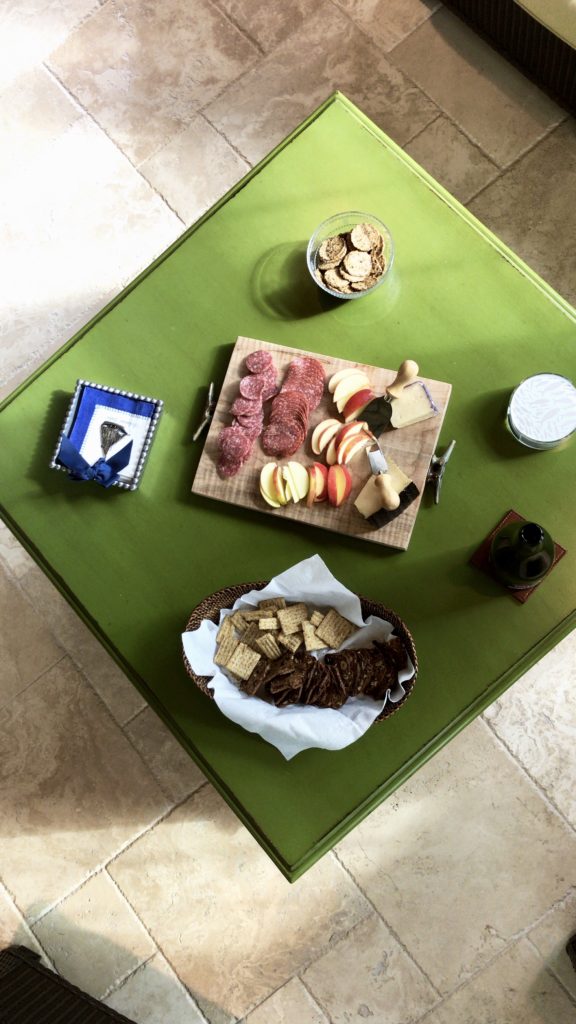 A quick shower and “lake outfit” later we all tucked into some charcuterie and a glass of wine before heading off to Gordy’s for dinner. A local favorite, Gordy’s offers everything from tacos to burgers to cheese curds. What’s even better, they have a gluten-free menu! 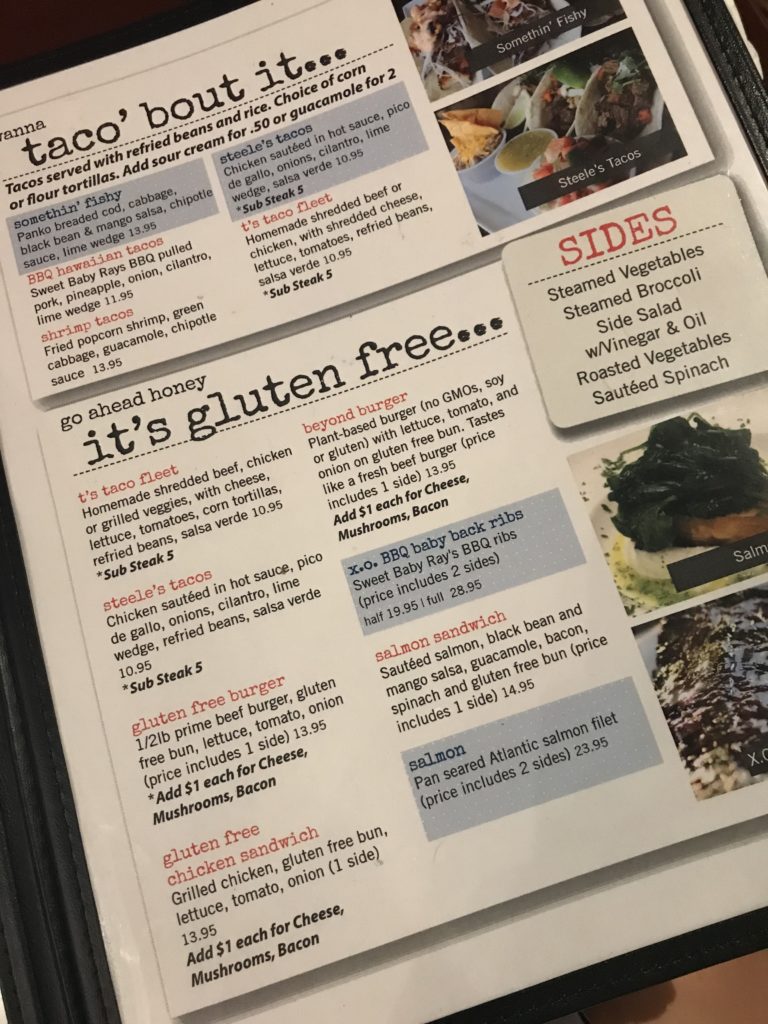 Our waitress was extremely well versed in cross-contamination, and I left feeling just as good as when I arrived. (Super cool adjustable necklace featured below!) 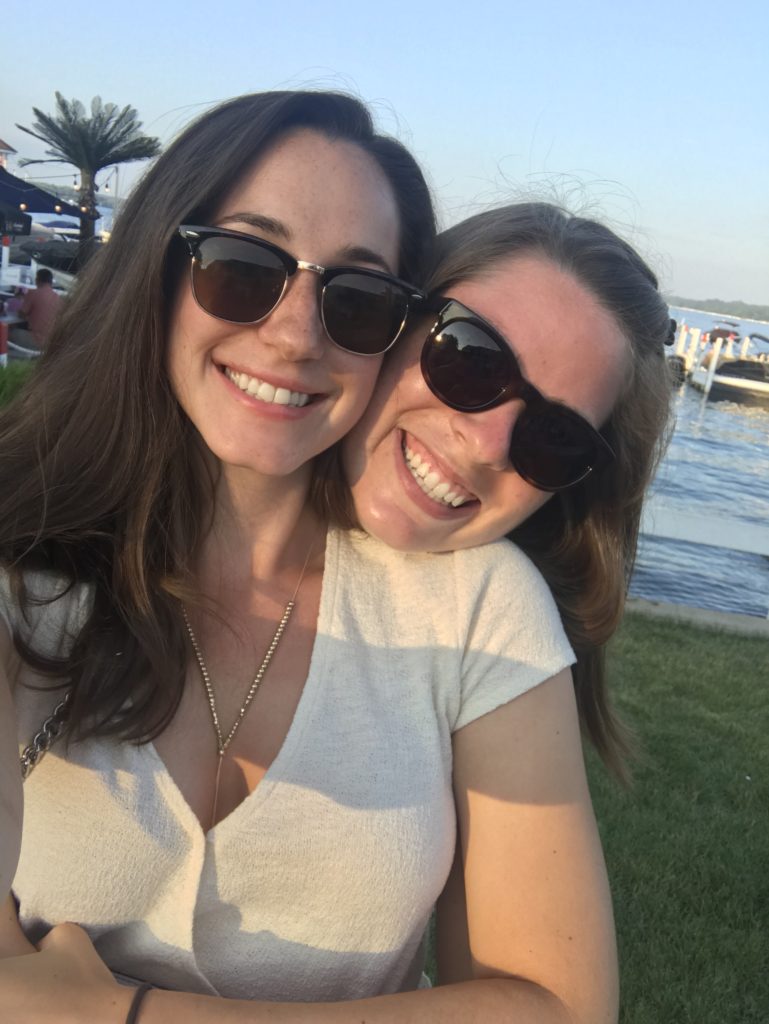 While waiting for our ride home, Megan struck up some conversation with the locals, and we had ourselves a mini photoshoot. (Hey Claire) 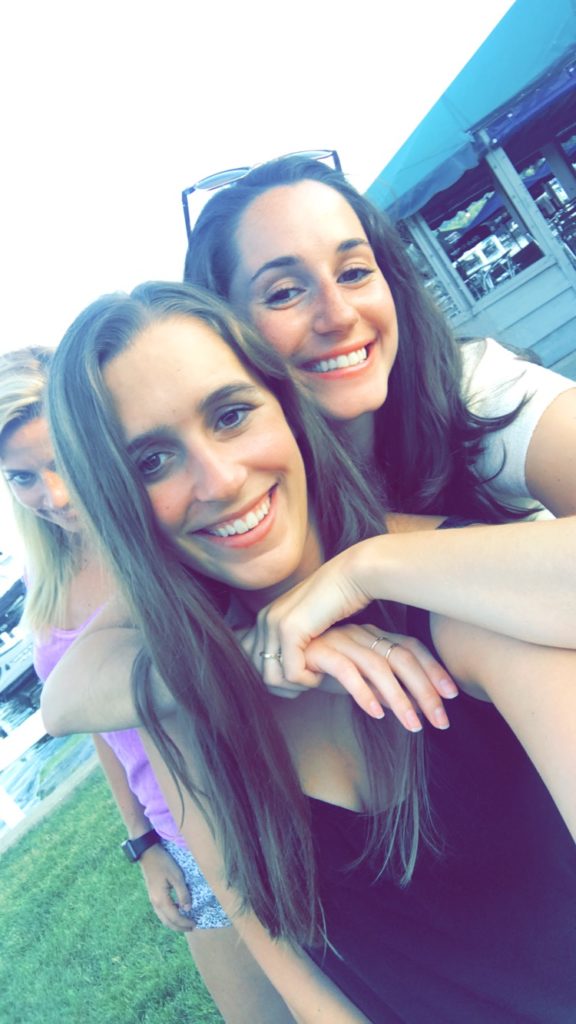 We got home just in time to throw on some leggings and enjoy the epic sunset. 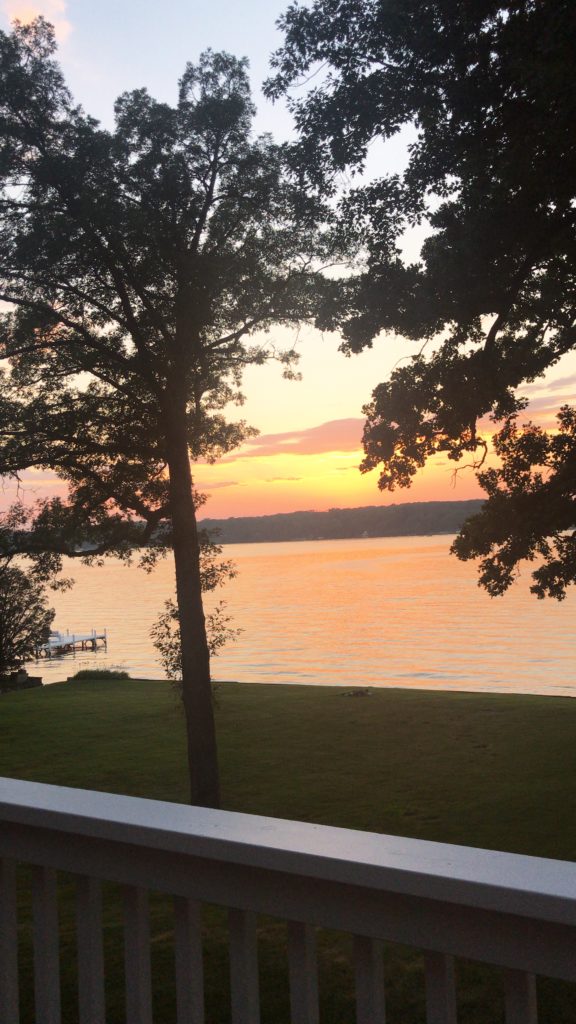 Later into the night I commandeered Bailey from some snuggles while we played Cards Against Humanity. We called it a night around 11:00pm, happily drifting off to sleep dreaming of jet skis and fudge. 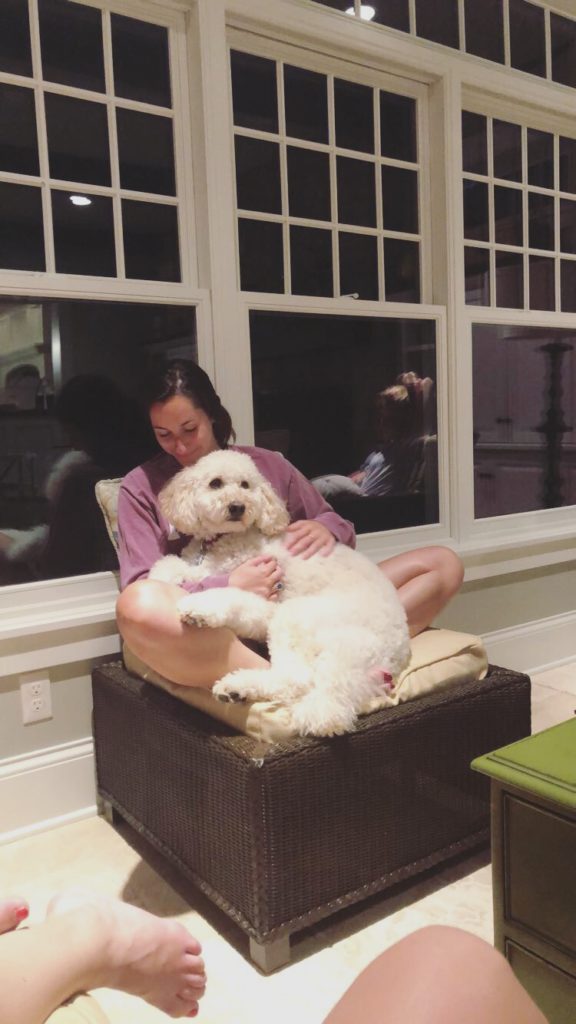 The next morning we said our goodbye’s, thanking Paige’s family for an epic weekend. After grabbing a light breakfast, we headed out around 9:15 am in order to arrive on time to our next destination. Because what would a trip to Wisconsin be without watching the world cup final at Brat Stop? 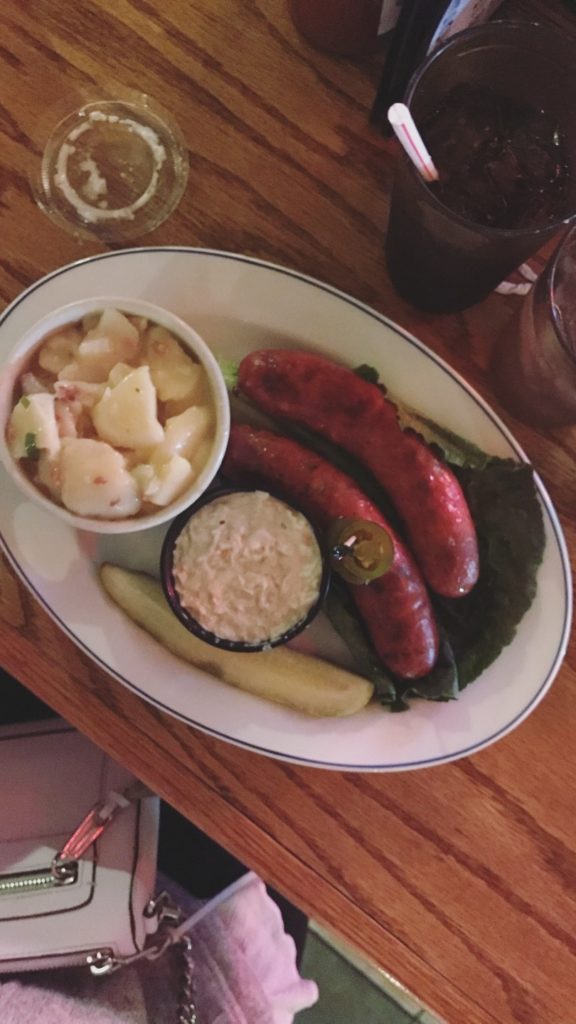 Gluten-Free friends, we can eat the two brat platter safely, with potato salad and coleslaw as our sides. They also offer bagged chips. After the game was over, (You’ll get ’em next time Croatia, well… maybe) we made our last pit stop before heading back to the city- Mars Cheese Castle. 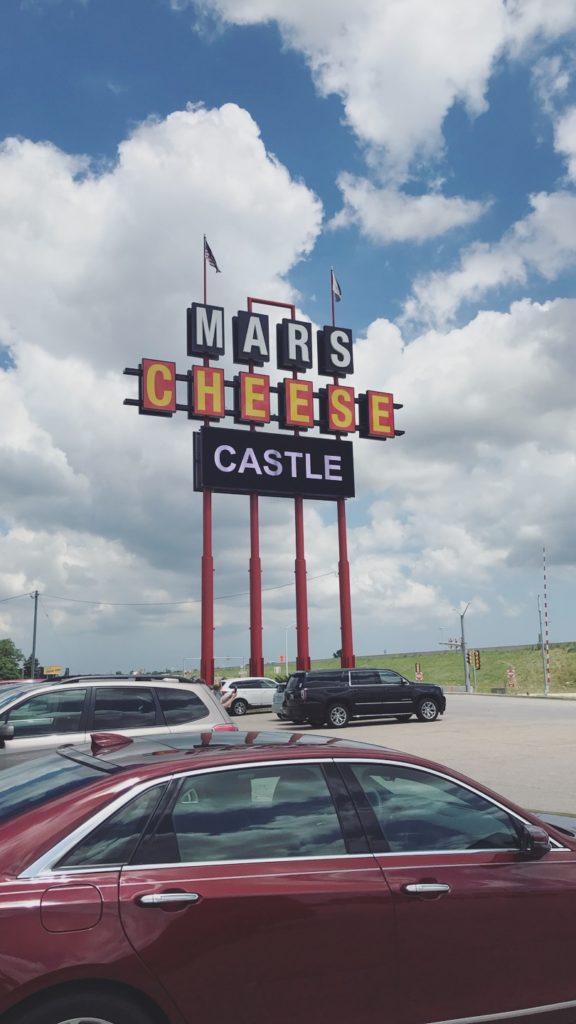 For those unfamiliar, this is literally a castle full of cheese, summer sausage, pickles, beer, and everything else good in the world. I highly recommend the fresh curds and Carolyn’s favorite, black cherry soda.

We ended the trip with an incredibly smooth drive back into the city, complete with more throwback jams, and lots of laughter.

Thank you again to Paige and her family for hosting us. The weekend getaway was just what we needed to refresh our city girl souls.